Put on your Glad Rags, jump in your Jalopy and come join us for a night of fun to celebrate the 20th Annual Winterfest event! This year’s theme is “Roaring 20's Speakeasy”. It's the BIGGEST charity event happening at the Lake of the Ozarks this winter and you won't want to miss it! 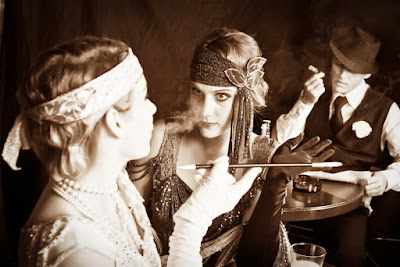 
The Roaring Twenties is a term for the 1920's in the Western world. It was a period of sustained economic prosperity with a distinctive cultural edge, particularly in major cities such as New York, Chicago, Detroit and Los Angeles. It was an era of dramatic social and political change. The nations total wealth doubled between 1920 and 1929. People from coast to coast bought the same goods, listened to the same music, did the same dances and even used the same slang!

The most familiar symbol of the 1920's is probably the "flapper." The term flapper refers to a young woman with bobbed hair and short skirts. Many refer to this era as the Jazz Age, where dances such as the Charleston, the cake walk, the black bottom and the flea hop all became popular. Due to the prohibition, people simply went to nominally illegal speakeasies instead of ordinary bars. These speakeasies were controlled by bootleggers, racketeers and other organized-crime figures such as Chicago gangster Al Capone.


Winterfest is a great event that raises funds for over 40 charities in the Lake Area. This party will be the Bee’s Knees with live and silent auctions, wine pull, gangster cocktails, mugshots, live music by the i-Berrys, costume contest and more. 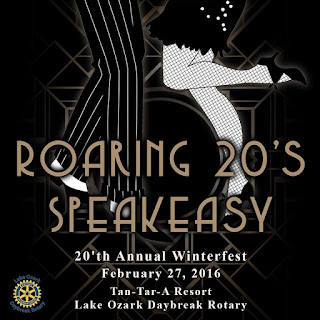 
This year's event is presented by the following Diamond Sponsors:
Without these community minded businesses we could not put on this great event that helps so many people in the Lake Area!

Steve Naught and his Lake of the Ozarks insurance company are proud supporters of this annual celebration benefiting Lake area charities through the Lake Ozark Daybreak Rotary. Sponsorship opportunities are available. Contact Steve Naught at 573-348-2794 or any Daybreak Rotarian for tickets. We hope to see you there!